with curatorial assistance by Jonathan Kinkley and Chaz Evans

in partnership with the Electronic Visualization Lab at The University

of Illinois at Chicago

and with additional support from The Chicago Community Trust and the

I am so honored to be included in this historic show. ah, longevity has its rewards. standing, once again on shoulders of giants! Special thanks to jon cates, curator and chair New Media, the School of the Art Institute of Chicago. SAIC, who had the vision to include me (ha ha..) about 100 strong in this show! I am alum of SAIC, my mentor was Phil Morton, tributes to the Video Research Consultants, his company, which I worked at for several of the SIGGRAPH conventions.

and of Course.. the reigning cosmic Dan Sandin! creator of the Image Processor, which has burned a hole in my mind’s eye, all theses years with that famous green light!

part of this! as we have discussed, your project

Native Dance Vibrations will be shown in: 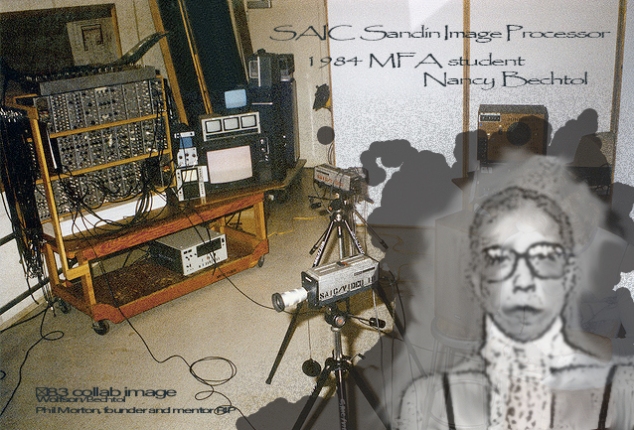 Keeping pace with tribal rhythms from the drum circle, images of dancers and the swirling colors of their mind-bending regalia are sliced, diced, and reassembled in eye-opening ways. These fragments are shuffle played in structural designs which suggest both the beating of the heart and similar movements occurring in Nature.

Distorted like primordial deities seen only in dreams, the (headless) “inverted” native dancers with feet simultaneously on the earth and in the ether are apt symbols for Bechtol’s transformations from psychedelic to cosmic.

Continuity is maintained in the morphing manner of a kaleidoscope (sic) as oscillations evolve from micro to macro, evoking initially the throb of cellular organisms and later the revolutions of planetary bodies.